I can remember the situation like it was yesterday. Going about my daily routine like any other day, a young lady whom I did not know came up to me inquisitively. She looked at me and asked, “is everything ok?” Looking at her puzzled, I replied, “yeah, why?!” “Because you always look angry.”

I wish I could tell you that I handled this situation well, but that would be a lie. Sure, I was fine in front of her, at least I acted unscathed in that moment. I mean, I did not yell or curse at her, no I saved that for the car. “Who the hell is she!!!” “Who the f____ is she to ask me that!!!” “Screw her, and everyone else at that stupid school!!!” You can see where this is going.

I had been found out, the façade had been cracked by this unsuspecting girl. I couldn’t sleep that night, I was so angry and embarrassed by this one singular moment……never knowing that this would propel me in what I now believe I am truly meant to do. See, what she did not know was that I was not angry……I was insecure. It took me a long time and a lot of fuming to finally figure that out.

I struggled mightily as a young person. I was stupid, I was an idiot, I was a loser (I could go on and on with the terms that engulfed my mind). Everyone else I looked at was significantly better than me and I could prove it. When this unsuspecting girl enlightened the world to my truth in a moment, she not only exposed my weak insignificance, she solidified the truth to all those deep / dark beliefs that I had harbored for so long.

Here’s the weird part. I don’t regret it. I don’t regret that moment. I wouldn’t change all those times I thought about seriously hurting myself. I would not change the deep-seated anxiety and depression I felt on a daily basis. I would not even change the impact those deeply held beliefs had on my poor school performance, my struggles in sports, my difficulties with peers, and my inability to connect with girls. I wouldn’t change any of them, because my hope now is that it helps me to connect with others in an empathetically impactful way.

I don’t know much, I am an expert at only one thing…….me. I know me better than anyone else ever will. I know my struggle, and thankfully I have been blessed to know a few others.

Popular posts from this blog

I WEAR A THOUSAND MASKS

April 11, 2022
This entry was posted on Tuesday, March 20th, 2018 at 2:46 pm For my very first entry, I had to share something that is deeply personal to me. This writing below speaks directly at who I see when I see you. The reality is only a very select few know my true mask, not because I am someone special, but instead because not everyone is safe. I hope that this resonates with you. I WEAR A THOUSAND MASKS (Charles C. Finn) I am every man and every woman you meet. I hope you won’t be fooled by me for I wear a mask. I wear a thousand masks, masks that I’m afraid to take off, and one of them is me. I am likely to give you the impression that I’m secure, that confidence is my name and coolness my game, that the water’s calm and I’m in command and that I need no one. But I hope you won’t believe me. My surface may be smooth…beneath I dwell in confusion, in fear, in aloneness. But I hide this. I panic at the thought of my weakness and fear of being exposed. That’s why I frantically cr
Read more 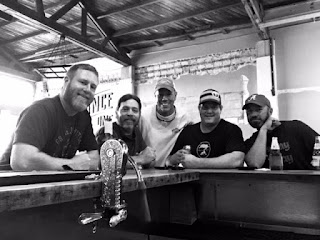 This entry was posted on Wednesday, April 11th, 2018 at 4:04 pm Over the last Spring Break my wife had the great idea that we should go see the family in my hometown of New Port Richey, FL. Going home, although rare, is always an interesting occasion. It was the place that I ran from at 27 years old because it was leading me down the darkest of paths. The place in and of itself is not bad, it was just not the best place for me. This time coming home was much different. This time I was introduced to real growth and prosperity. One of my best friends, when faced with a personal turmoil, decided not to wallow in self-pity and anger, but used it to drive towards a dream. He had sent me a random text months ago about his company laying him off, and…well, lets be honest, how do you respond to a text like that. I struggled, I wanted to say just the right thing, to make just the right impact on such a difficult occasion. In the end, I don’t even know what I said, but I know that I tried to m
Read more

May 02, 2022
This entry was posted on Wednesday, April 4th, 2018 at 7:55 pm I had the privilege to listen to a podcast recently in which ex-Navy Seal David Goggins was interviewed. The short version of a very long and difficult story is one of a young man that was abused, saw his mother abused, was seen as stupid, and essentially a nothing in this world with nothing to live or fight for. All David Goggins did was overcome obstacles normal people would quit easily at, to become a true savage and warrior of life. If you don’t know him, please look him up. I have to say that hearing stories like David’s never gets old. It pumps me up, it lifts my spirits, it makes me want to do another round on the heavy bag instead of sitting on my lazy ass watching television. Shoot, honestly, the reason I became a psychotherapist was to figure out what was wrong with me, and hopefully figure out how to not continue to make the same stupid choices. Yet, that still small evil voice will pop into my head, immediatel
Read more